The magnetic-impulse technology of bridging and cleaning of hoppers has a huge potential for application at the enterprises of construction industry. The manufacture of construction materials is associated with the extraction, transportation, storage of various bulk materials, many of which are prone to hanging and have high adhesion rates. They are combined, mixed and processed. Among the materials are such as:

RPE “MITEK” LLC has a wealth of experience in the successful application of magnetic-impulse installations IM to eliminate hanging, sticking and freezing of the above mentioned materials in hoppers, silos and chutes at various industrial enterprises. Some of these bulk materials are well known to us for use in other industries. For example, in metallurgy, hoppers with limestone, slag, sand, lime, etc. are equipped with IM installations. We collapse the rock in the receiving hoppers of the mining and processing industry, and coal is found everywhere.

The specific type of IM installation for each object, and accordingly its cost, is determined based on the number and size of serviced hoppers or filters, material properties in hoppers, hopper design, etc., and is usually determined and agreed upon after examination of these objects by our specialists.

The use of magnetic-impulse equipment in the production of construction materials began in 2004. 8 open-air crushed stone hoppers were equipped with one installation IM, where bridging occured, especially in winter.

Scheme of equipping hoppers with crushed stone with IM installations: 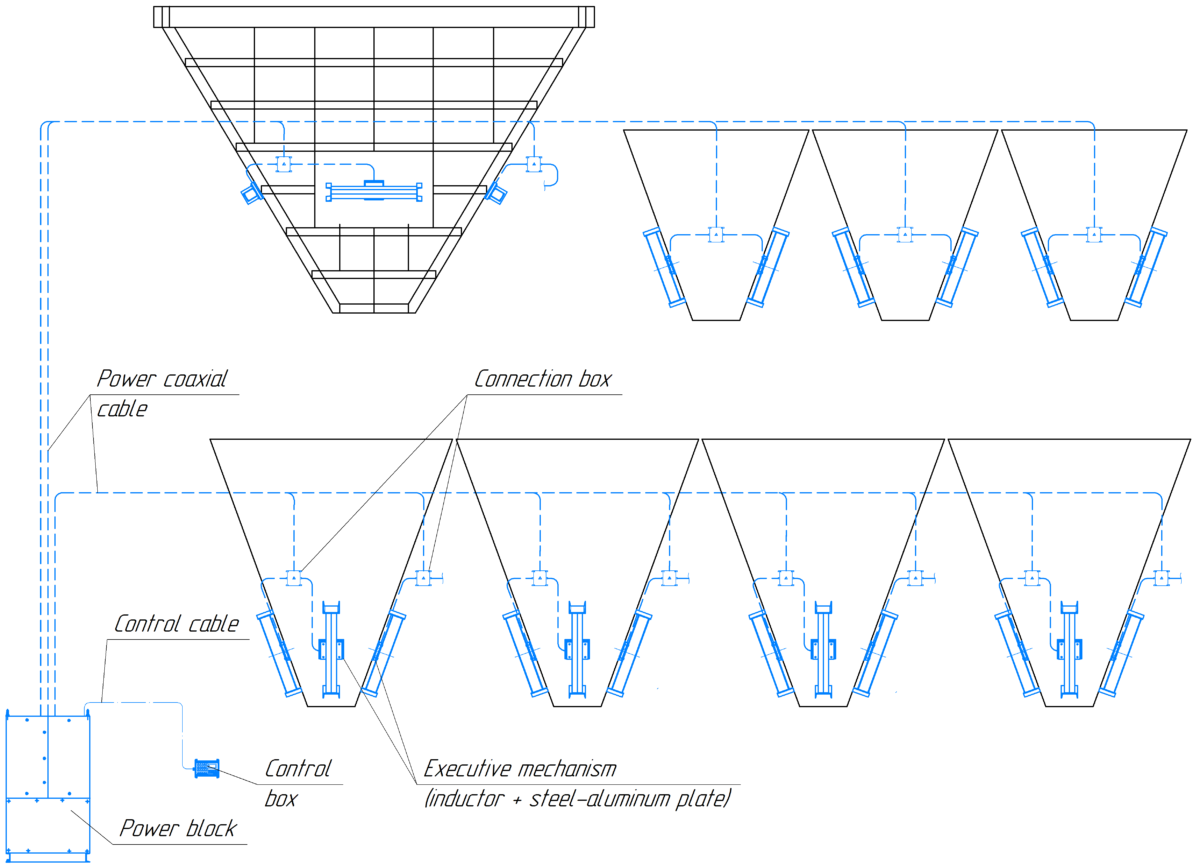 Effective bridging allowed to reach the planned indicators of crushed stone supply and even exceed them.

In cement production, bulk materials are passed through metal and concrete hoppers, various chutes, stored in silos, etc. The hanging often occurs, which leads to disruptions in the production process, a decrease in the volume and quality of products.

Since 2008 installations IM have been successfully solving problems of eliminating suspended material at cement production facilities.

Scheme of equipping hoppers of gypsum, slag, gravity flow with a magnetic-impulse bridging system based on the IM installation: 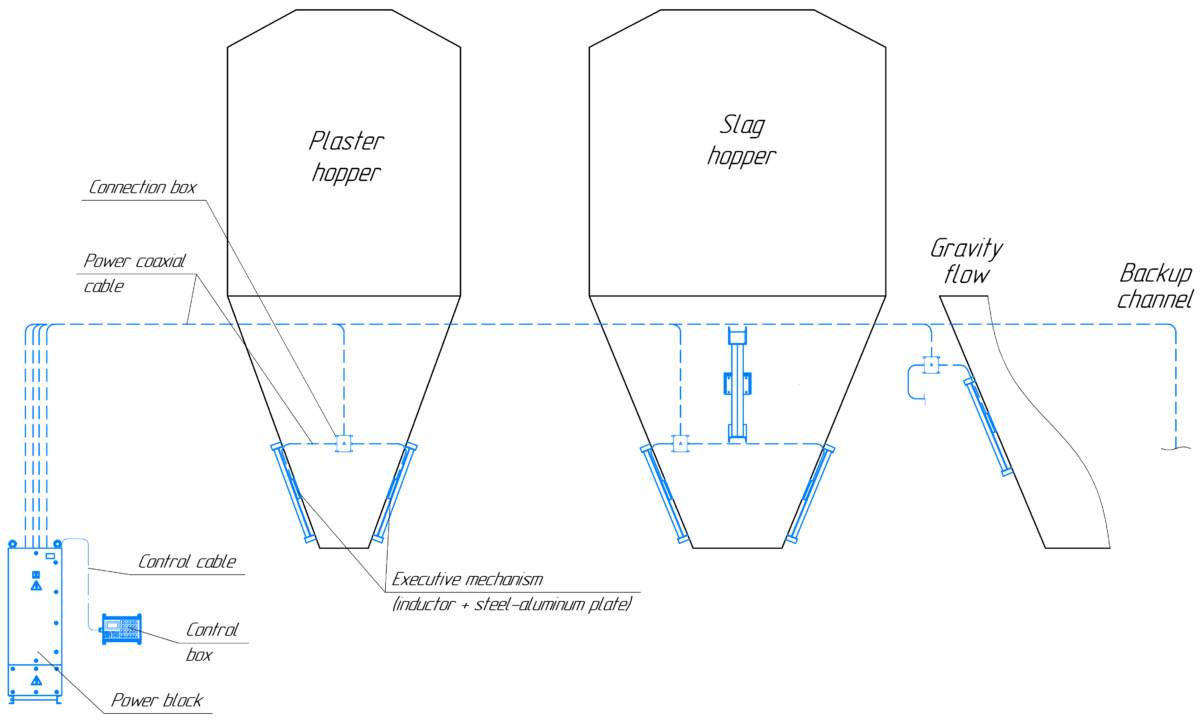 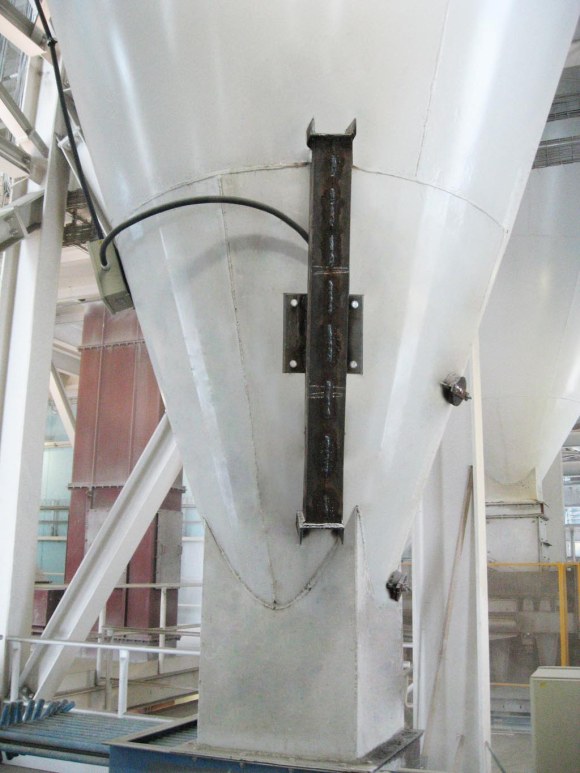 Examples of equipping schemes with IM installations of some production facilities

Hoppers with gypsum, slag, limestone, clay, cement and others (from 100 tons and above)

For these hoppers, installations such as IM4-1,8-n, IM3-1,9-n are applicable, where n is the number of channels from 1 to 16, 2 executive mechanisms per channel.

Rectangular hoppers, whose inclined part is in the shape of an inverted truncated pyramid

The number of executive mechanisms and their distribution over the surface of the hopper depends on its capacity, the thickness of the walls to be cleaned, the presence and design of stiffening ribs, physical and chemical properties and moisture content of the loaded bulk material.

Cylindrical hoppers with a tapered inclined part. Executive mechanisms are placed in one or two tiers

In order to equip concrete hoppers with a magnetic-impulse collapse system, the conical part of the concrete hopper inside is equipped with another steel bunker, on the walls of which an impulse effect is made through the cutouts in the concrete wall of the cone. Installations such as IM3-1.9-n, IM4-1.8-n are applicable, where n is the number of channels from 1 to 16, two actuators per channel.

Scheme of equipping concrete hoppers with a magnetic-impulse bridging system 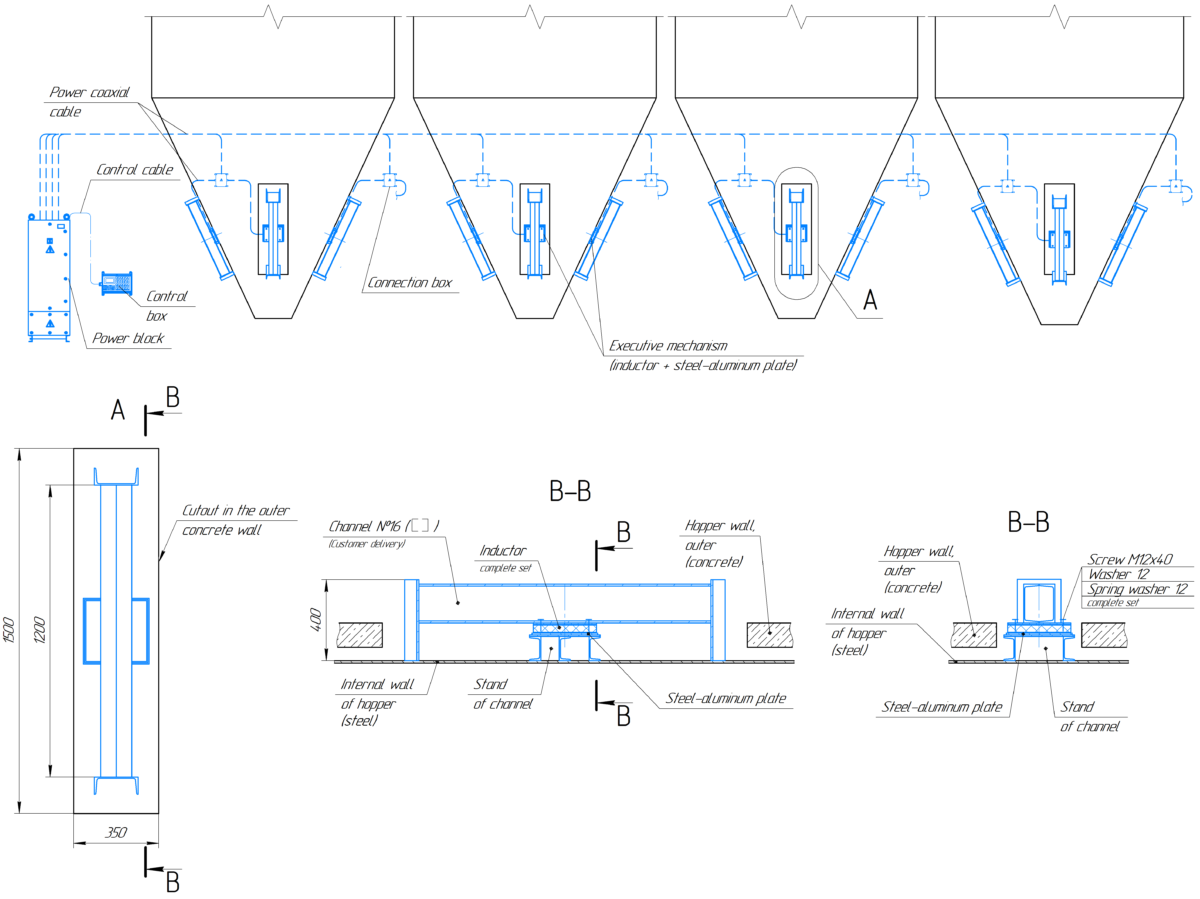 Hoppers for dust collection of bag and electric precipitators, hoppers of the dust offloading area.

An example of the placement of executive mechanisms on the metal dust collection hoppers in one tier.

In this case, installations of the IM3-1,1-n type are applicable, where n is the number of channels from 1 to 16, one or two executive mechanisms in the channel. 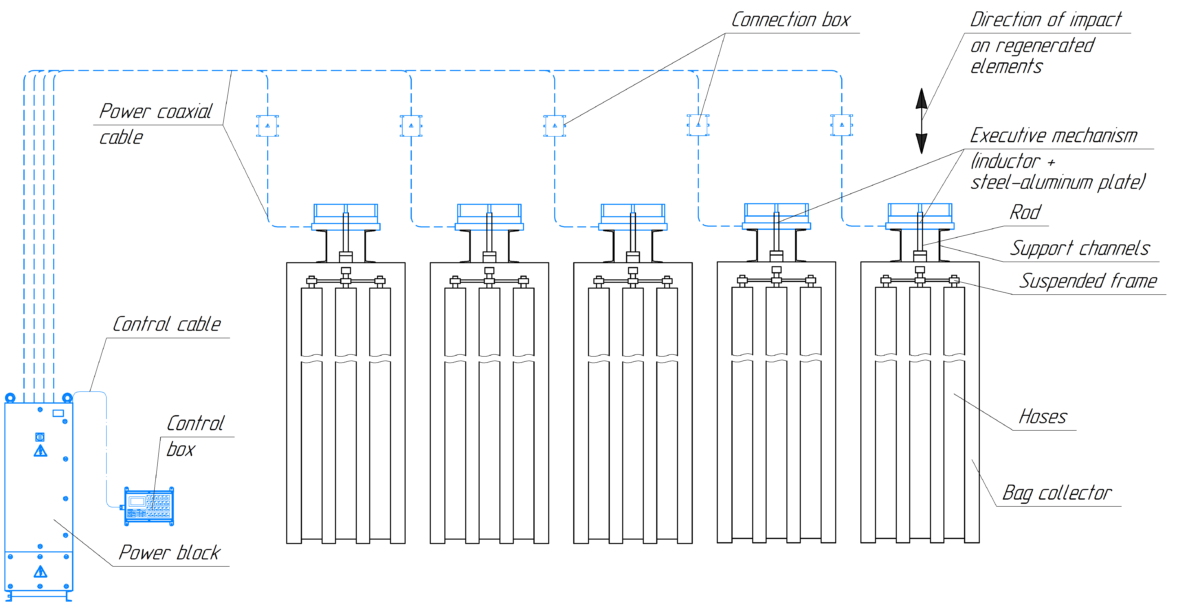 The executive mechanism of the installation (inductor + double-layer plate) creates a controlled impulse effect on the movable rod and bar, which shake the precipitation and corona electrodes. Installations of the IM3-1,1-n type are applicable, where n is the number of channels corresponding to the number of processed fields of the electric precipitator. 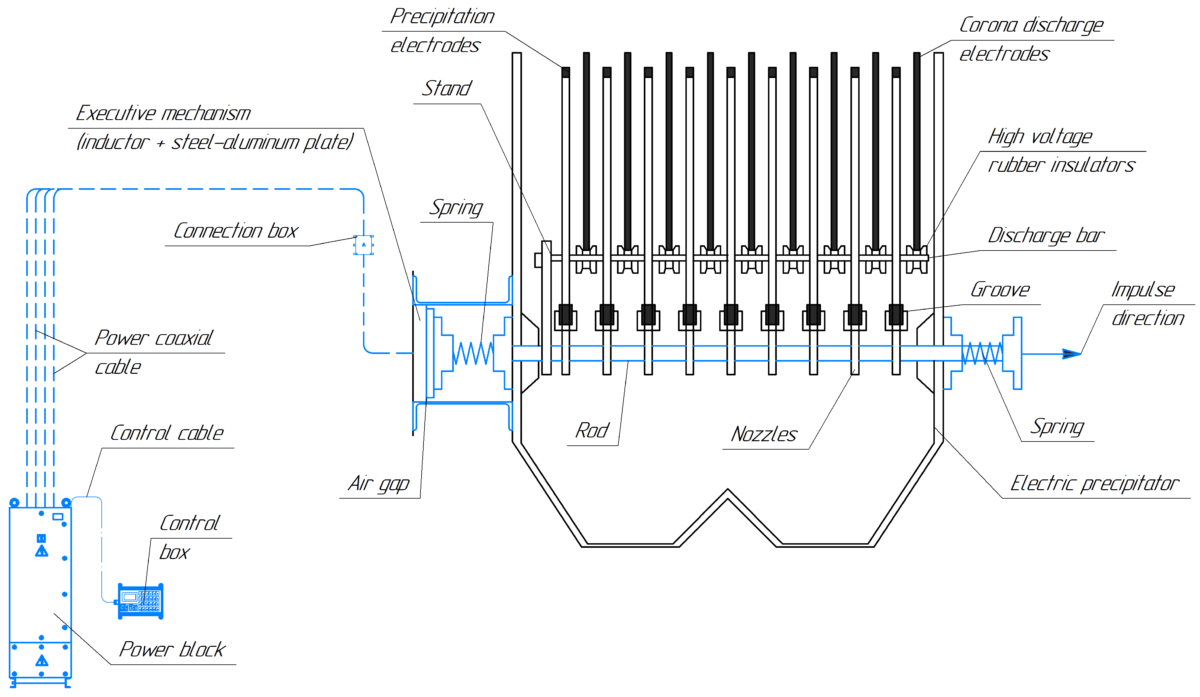 The structures of the executive mechanism attachments are made by the Customer in accordance with the design solutions issued by the design and research service of RPE “MITEK” LLC.

The use of modern highly efficient systems of bridging on the basis of magnetic-impulse installations IM manufactured by RPE “MITEK” LLC has a number of advantages in comparison with pneumatic and vibration systems, namely:

We are always glad to receive your orders!