Preparation of ores for smelting includes crushing, screening, homogenization and enrichment. At each of these stages, hoppers, chutes, trays, etc. are used, where magnetic-impulse installations can be applied. In addition, in the process of screening blast-furnace materials, when rubber sieves are used in screens, magnetic-pulse installations (see the list of implementations), for example, IM3-0,8-6, can also be used to clean them, as was done on coke screens five blast furnaces Iron and Steel Works “Azovstal” (year of implementation 2006).

The next stage of blast furnace production is ore agglomeration – the process of converting fine ores and concentrates into lumpy materials. In ferrous metallurgy, such methods of agglomeration as agglomeration and rounding of ores are most widely used. The use of magnetic-impulse installations in agglomeration, see the section “Sinter production”.

The loading of prepared charge materials into the blast furnace is carried out through cone or coneless loading devices (CLLD). In the latter case, the charge materials are fed in separate portions to the CLLD located on the tops of the hopper, where material jamming (so-called stagnant material) can occur. To prevent this kind of hanging, magnetic-impulse installations IM manufactured by RPE “MITEK” LLC can be used. Thus, in 1998 and 1999, on 4 hoppers of CLLD of blast furnaces № 3 and № 4 of Iron and Steel Works Azovstal two magnetic-impulse installations IM5-1,8-2 were implemented with location of two executive mechanisms on each hopper. A similar problem was solved in 2007 on two hoppers of CLLD of the reconstructed blast furnace № 1 of Alchevsk Iron and Steel Works. In addition, here with one IM5–1,8–6 installation was solved the problem of material collapsing in the filling funnel having an insufficient angle of inclination of the side walls for free flow of material.

The layout of the executive mechanisms of the installation IM on the loading funnel and hoppers of the CLLD:

Magnetic-impulse systems of arches collapsing can be widely used at various objects of hopper racks of blast furnaces. The high efficiency of the collapse of suspended materials, the ability of the equipment to operate in a fully automatic mode in combination with modern automated charge supply systems serve as the basis for continuation of cooperation between RPE “MITEK” and the Research Institute “Giprostal” (Kharkov), SE Ukrgipromez (Dnepr) and other design companies with the prospect of including the installations IM in projects for the reconstruction of old and construction of new blast furnaces.

In blast furnace production, magnetic-impulse installations are also used at various objects of aspiration sites. For example, since 2003, the installation IM5-0,8-5 has been in operation at Iron and Steel Works Azovstal for cleaning four hoppers of the dust collection section after the electric precipitator of blast furnace № 6, provided for by the design of the aspiration section developed by Research Institute Gipromez (Dnepr). The installations of a similar purpose at the hoppers of dust shipment sites were introduced in 2004 at JSC Zaporizhstal (installation IM3–0,8–4 for one storage hopper), in 2007 at JSC Dneprovsky Integrated Iron and Steel Works (two installations IM3–0,8–6 for 6 hoppers), in 2007 at OJSC ArcelorMittal Kryvyi Rih (two installations IM3–1,2–4 for two storage hoppers).

The layout of the executive mechanisms of the IM installation on the hoppers of the dust shipment section:

On hoppers with dust of a significantly larger capacity and for the other purposes, for example, dust collecting towers, IM installations manufactured by RPE “MITEK” LLC can also be used. Thus, in 2008 at the metallurgical plant “U.S. Steel Kosice” (Slovakia) on a dust collecting tower with a diameter of 10 m and a height of 30 m the installation IM4–1,6–10 was introduced, with location of 20 executive mechanisms on the cone and to ensure the uninterrupted release of captured dust.

Appearance of the dust collection tower equipped with the installation IM: 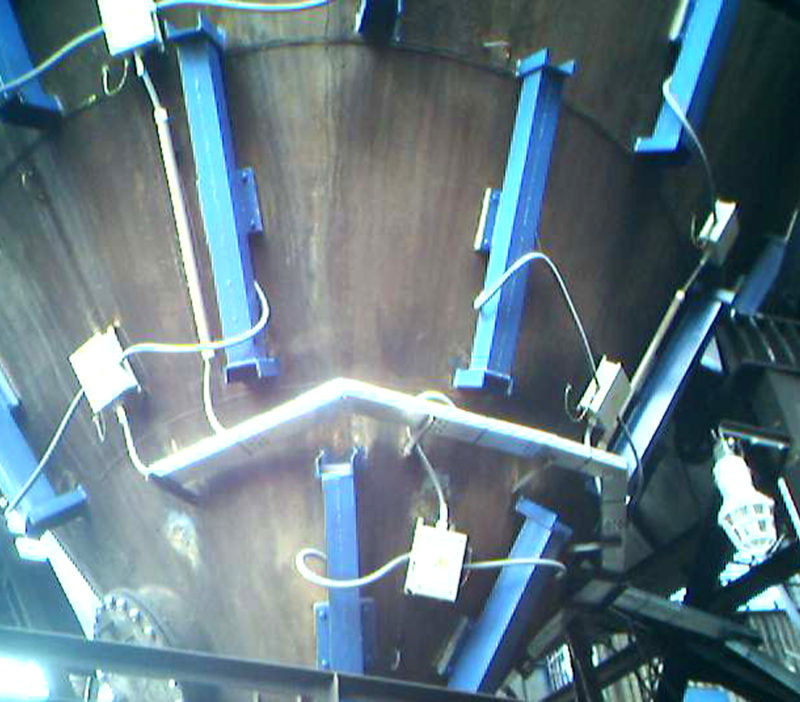 The introduction of the installation IM enabled to completely reject the previously used blasting operations when cleaning the tower from adhering dust.