In sinter production, that uses the processing of various bulk materials, quite often there are problems of materials hanging in hoppers, chutes, on guiding trays and other objects. Hanging leads to a disruption in the normal technological process of production, a decrease in the labor productivity, a decrease in the quality and volume of products.

One of the main tasks in sinter production is to ensure the uninterrupted operation of the charge department, on which the productivity of the sinter plant largely depends. The charge is a multicomponent bulk material, where composition must comply with technological standards. Violation of the dosing process and untimely supply of various components to the charge conveyor belt leads to a decrease in product quality, and in some cases to its rejection.

It is logical that the main requirement for hoppers is confined to unhindered unloading of material and its uninterrupted supply to the production process. Due to the increased humidity, lower temperatures, changes in the particle size distribution of bulk materials, as well as due to various design features of the hoppers and their physical condition, ore and other components in the hoppers often hang, forming arches and bridges that prevent the release of bulk materials from hoppers.

Problem of material hanging is usually handled in a rather primitive way, by means of poking through special holes or pockets, as well as lowering personnel into the hopper, that is fraught with great danger. This practice is contrary to all labour safety requirements. Sometimes sudden collapses of arches cover the pokers, up to fatal cases. Another example of the use of manual labour to force material out of a hopper is the use of sledgehammers or more powerful impact tools such as swinging rails.

Everyone knows the consequences of this method:

In addition to the low efficiency of this method of arch collapsing, one has to face the frequent shutdowns of processing lines for unscheduled repairs.

Since the 1990s, to eliminate the hanging of bulk materials, electric vibrators and pneumatic systems have been replaced by efficient and economical in operation magnetic-impulse installations IM, having a number of advantages compared to their predecessors, namely:

At present, a lot of IM magnetic-impulse installations have been implemented in the sinter production of various metallurgical plants:

Such objects are equipped with IM installations as:

Receiving, dosing hoppers, and of sintering machines, with charge, ore, concentrate, limestone, lime and others (100 tons and more)

For these hoppers, installations of the type IM4-1,8-n, IM5-1,8-n are applicable, where n is the number of channels from 1 to 16, 2 executive mechanisms per channel.

Rectangular hoppers, the inclined part of which has the shape of an inverted truncated pyramid

The number of executive mechanisms and their allocation over the surface of the hopper depends on its capacity, the thickness of the walls to be cleaned, the presence and design of stiffeners, physical and chemical properties, and humidity of the loaded bulk material.

Cylindrical hoppers with a conical inclined part. Executive mechanisms are placed in one or two tiers 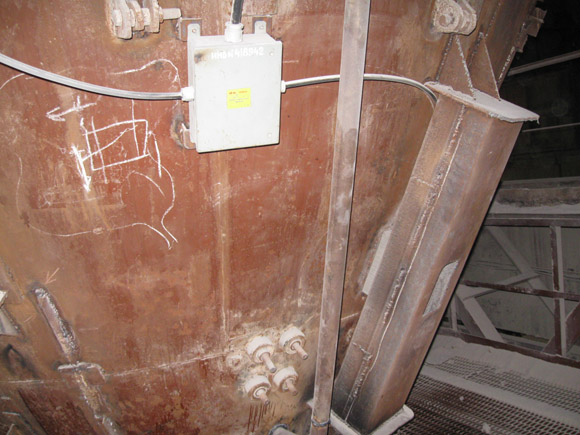 Transfer chutes from conveyor to conveyor

For these objects, installations of the type IM3-1,1-n, IM3-1,9-n are applicable, where n is the number of channels from 1 to 16, two executive mechanisms per channel.

For these objects the installations of IM3-1,1-n, IM3-1,9-n type are applicable, where n is the number of channels from 1 to 16, two executive mechanisms per channel. 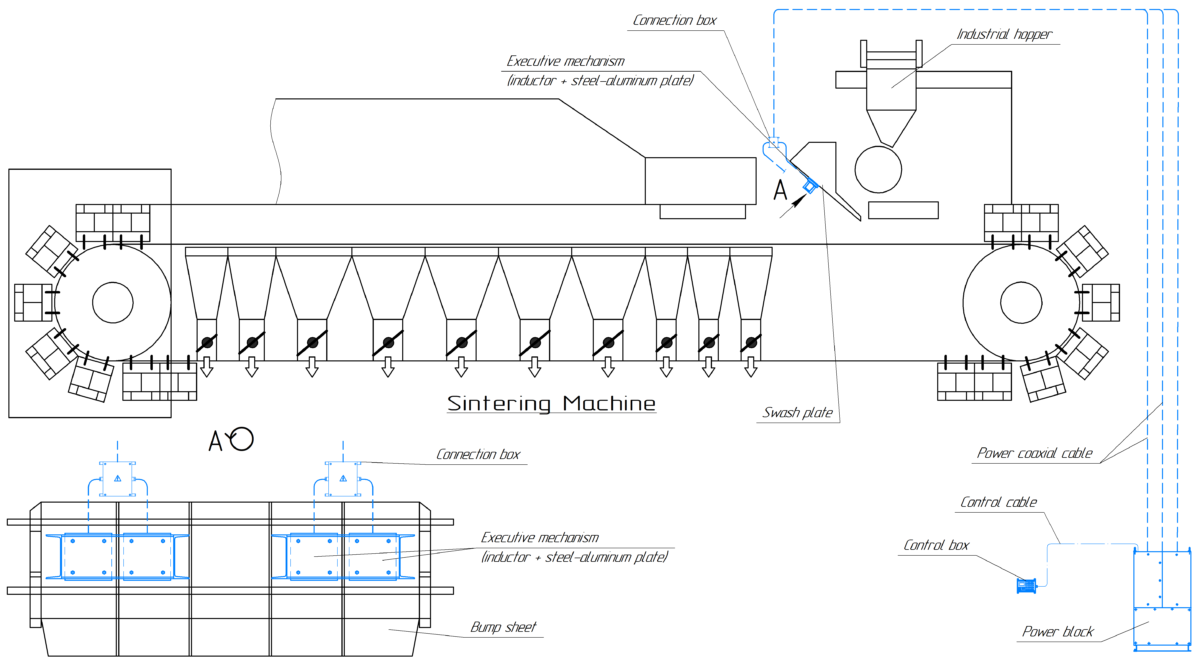 Dust collection hoppers for electric and bag filters, as well as storage hoppers for the dust shipment section are equipped by installations IM. For these hoppers, installations of the type IM3-1,1-n, IM3-1,5-n are applicable, where n is the number of channels, from 1 to 16, two executive mechanisms per channel.

The external view of dust collection hoppers of electric precipitator of the sinter production, equipped by installation IM

In general, the installations IM replace previously used traditional systems. For example, at the sintering plant of metallurgical plant “Azovstal”, starting from 1993, hoppers and chutes have been equipped with magnetic-impulse systems based on installations IM. Up to the closure of the sinter plant in 2012, 12 installations IM were in operation there, and the use of electric vibrators was completely excluded.

At some enterprises, there is a joint operation of installations IM and traditional systems, while the latter are used as auxiliary equipment operating in sparing modes. For example, at OJSC Dnieper Metallutgical (Kamenskoye), after the introduction of installations IM on 12 charge hoppers of sintering machines, the previously operated pneumatic collapsing system was not dismantled, but continues to be used as an auxiliary system. The annual cost of the air consumed by the system has decreased, according to the calculations of 2006, by about UAH 300,000 (see review).

Implementation of installations IM on the hoppers of sintering machines and in front of the pelletizing drum in the sintering production of the U.S. Steel, s.r.o. Kosice allowed to reject the weekly blasting works to collapse the deposits of materials suspended in these hoppers.

At present moment, magnetic-impulse systems of arches collapsing based on installations IM are included in the projects for the reconstruction and construction of new sintering productions carried out by various design institutes.

MITEK carries out works on the further implementation of installations IM at various sinter production facilities.

Your orders are always welcome!